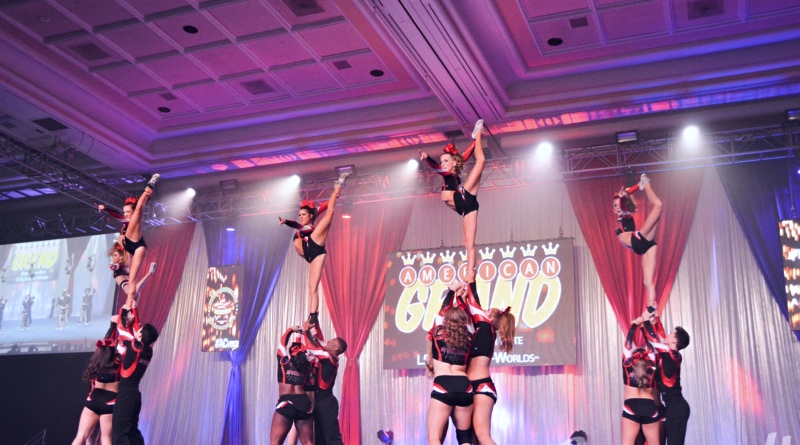 Allstar Cheerleading is divided into 7 different levels, where each level allows different skills to be performed.

In this article, we will cover levels 1-7 and explain how they are different from each other. You will also find video examples of skills and routines on each level so that you can easily see the differences between them.

Disclaimer: the level system can look different depending on where in the world you are. This explains the USASF/IASF level system that is most commonly used. Learn more about the difference between the two here: The USASF, IASF & ICU – What Are They and What’s the Difference?

Teams compete on different levels that allow different skills. The level system starts with level 1, followed by level 2, and so on. Level 7 is the highest level in cheerleading, where the most skills are allowed.

A common belief is that the higher level a team is on, the better it is. That is not true! The level does not indicate how good a team or athlete is. Athletes on all levels are incredibly skilled and teams are just as competitive on level 1 as level 7.

Gyms can choose to have teams on any level – there are no specific requirements to compete on a specific level. However, being on the level that best matches a team’s skill abilities is often the best option. Having a team with mostly level 3 skills compete on level 5 would probably only lead to more problems than the “glory” of being on a higher level!

Now that you have some basic knowledge about the level system, let’s get into the different levels!

Note: these are NOT the full rules of all levels, but a very simplified version. Please check the rules that apply to your team before competing. Click here for more scoring information.

Teams competing on level 1 have the most restrictions when it comes to skills. Despite the strict rules, many routines are very creative and teams perform difficult skills!

For stunts, the flyer is not allowed to be held higher than prep level (exception for pyramids, see below), which is by the base’s shoulders. One-legged stunts are allowed but must be braced if on prep level. A brace is not needed for one-legged stunts below prep level. Up to a ¼ twist is allowed in stunts.

For pyramids, flyers are allowed to be lifted on two legs at an extended level. This is only if the flyer is braced by another flyer on prep level or below.

For pyramids, flyers are allowed to be lifted on one leg at an extended level. This is only if the flyer is braced by another flyer on prep level or below.

Starting on level 3, we see teams performing tucks in tumbling and basket skills!

For pyramids, full-ups to extended level are allowed for one-legged stunts as well, if braced. Skills like ball-ups and braced flips are also allowed to some extent.

Yes, you read that right – 4.2! Level 4.2 is a very special and fun level that many people still don’t know about.

Level 4.2 combines level 4 stunting and level 2 tumbling in the same routine. This level is not as common as the others, but still a part of events like The Summit and D2 Summit.

On level 4, more and more spins and twists are allowed in stunts!

Teams are also allowed to do up to 1 twist to extended one-legged stunts and 1 ½  twist to prep level one-legged stunts. We also start seeing more advanced inversions, such as handstands and back handspring ups. Two skills are allowed in basket tosses, like double twists and kick fulls.

IASF rule: international level 4 teams are allowed to perform a 1 1/2 twist to one leg on extended level. Read more about that rule here.

More skills are allowed in level 4 pyramids, like braced flips and rewinds, 1 ½ twists, and more.

Level 5, previously called “restricted 5”, is where twists in tumbling start to appear!

The main difference in tumbling is that athletes are allowed to perform full twists in running tumbling, like a round-off back handspring full twist.

Level 5 pyramid skills are similar to those allowed on level 4. For some skills though, more twisting is allowed and fewer braces needed.

Stop trying to keep up with what’s happening in the cheerleading world… Subscribe to our newsletter & get the latest news straight to your inbox!

Trusted by thousands of readers. Totally free. Every Monday!

Now that we’re getting to level 6, it’s time to double the skills!

Double-ups are allowed to both two-legged and one-legged stunts. Flyers can also double twist down from a stunt, where up to 2 ¼ twists are allowed. Up to three skills are allowed in basket tosses, like the kick doubles most teams perform.

The level 6 tumbling skills also double, since double fulls are allowed! Almost any tumbling pass is allowed to end with a double full so it is one of the main level 6 skills we see in tumbling. For standing tumbling, it is also allowed to perform standing fulls.

In pyramids, flyers are allowed to twist in flips and release moves on level 6, unlike level 5 and below.

Want to see some more level 6 basket tosses? Check out this article: All Of The Baskets Invented By TGLC (More Than You Think!)

The highest level! On level 7, many teams perform drastically different skills than level 6 and below.

Free flipping (where the flyer has no contact with a base or braces) stunts and dismounts are allowed on level 7. Skills like rewinds and back handspring full ups are allowed to both extended one and two-legged stunts.

Many teams get creative and perform a round off to rewind or even a full rewind for example:

As flyers are allowed to flip in baskets, many different skills are allowed. Level 7 features baskets like double fulls, pike open fulls, kick triples, and many more. Throwing a flyer from one stunt group to another is even allowed!

The biggest difference in tumbling compared to level 6 is that a back handspring to double is allowed. On level 6, a minimum of two back handsprings must be performed before a double.

For ICU Worlds (read about what that is here), only single fulls are allowed as the competition is on hard floor and not spring floor.

Another big difference on level 7 is that pyramids are allowed up to 2 ½ stories high. That means a flyer on prep level can hold up another flyer! Teams use different creative ways of getting that top flyer up, often using flips and twists.

We hope this article helped you learn more about the different levels in cheerleading, all the way from level 1 to level 7! Please consider sharing this information with others who might find it helpful.

Do you want to learn more about cheerleading? Make sure to check out our other guides, articles, tips, and more.

5 Things That All Cheerleaders Should Expect From Their Gym