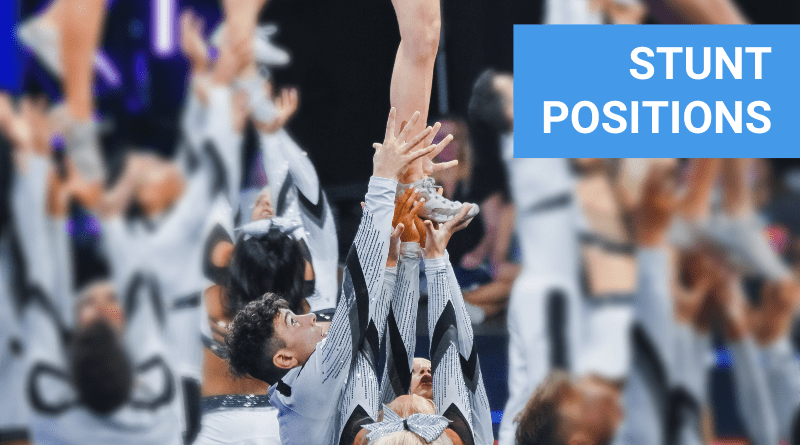 As a beginner, understanding the different cheerleading positions can be complicated. You may wonder what the different roles of a stunt are and what each person is meant to do? That is exactly what we explain in this article.

There are three main types of positions in cheerleading stunts; bases, flyers, and spotters. The positions can be further broken down into main bases, secondary/side bases, back spots, front spots, and additional spotters. We will break down all these different positions, their roles, and why they are important!

First of all, here are some common misconceptions about stunt positions in cheerleading:

Note: the specific grips and techniques of each position are complicated and vary depending on multiple factors. We will only cover a few basic examples in this article.

You can also learn more about each position in the official ICU glossary.

The bases are the people directly under the flyer. Their role is to lift, throw, and catch the flyer and to hold the stunt as stable as possible.

There are typically 1-2 bases in a stunt, depending on the specific division, rules, and score sheets a team competes under.

For stunts with two bases, the base’s roles vary depending on which side of the stunt they are on, which we will explain next.

For one-legged stunts, the main base typically holds the toe and heel of the flyer. The main base is typically directly underneath the foot, giving as much stability as possible.

Some stunts require releasing and catching the flyer’s feet, like a full up for example. Depending on the team’s level, the main base may be required to hold on to the flyer’s foot during the spin.

Watch the video below for some releasing and twisting examples. From level 3 and higher, you can see main bases holding on to the foot the entire spin:

In one-legged stunts, the side base is responsible for the middle part of the foot, between the main base’s hands.

There are different types of side base grips for this type of stunt. Examples include having both hands underneath the foot, one hand underneath and the other over, or one under and the other supporting the main base.

As mentioned above for main bases, some stunts may require releasing and catching the flyer’s feet. This usually means the side base needs to let go of the foot completely and then catch it again.

Watch the video above for some examples of side bases releasing and catching the foot.

A flyer is the person being lifted or thrown in a stunt.

The role of a flyer is to stay as tight as possible and often to perform different types of skills in the air. These types of skills can include twists, flips, and more depending on the team’s level.

Other than staying tight, flexibility is one of the most important things for flyers.

Because body positions help increase a team’s stunt score, flyers need to be able to correctly perform these.

A back spot is the person behind a stunt, typically holding (and lifting) the ankles, calves, or waist of the flyer.

The role of a back spot is, like bases, to lift, throw, and catch the flyer. Back spots are therefore also responsible for holding the stunt as stable as possible.

When catching a flyer, the back spot typically catches the shoulders and head – which is a crucial job!

A front spot is someone who is placed in front of the stunt. Front spots will typically help catch the flyer, and provide additional support and extra strength in basket tosses for example.

This stunt position is rarer to see, simply because they are not required according to the rules. But don’t let that fool you – being a front spot is still a demanding and important job!

This person typically stands next to a stunt, ready to help if the stunt is shaky or on its way to falling.

We hope this quick guide helped you understand the different stunt positions better! If you’d like to learn more about Allstar cheerleading, check out some of our other guides:

If you want to stay updated on the sport, consider subscribing to our (free) weekly newsletter. Every Monday, we send one talking about the latest news & happenings in the sport!

When Cheerleading Isn’t The Same – How To Handle Change