If you have ever watched a cheerleading routine on YouTube, chances are you’ve come across Andy’s channel!

Andy Simon has made a name for himself in the cheerleading industry, providing high-quality videos from various competitions and showcases. In addition to that, he has also been an athlete at Cheer Athletics for the past years, with accomplishments such as medaling at The Summit & NCA wins.

You had the chance to ask him anything – it’s now time for the answers. Here’s our interview with Andy!

When did you start cheerleading and why?

My older sister cheered for 2 years so that’s how I was introduced to it. She moved to Cheer Athletics her last year and I would go to her practices and competitions and just consumed so much cheer through movies like bring it on or competition reruns on ESPN. However, when I got to middle school a lot of my friends cheered at CA and that’s when “Cheerleaders” on ATV was super popular, so I deep-dived even more into all-star cheer and really became a fan.

We think you’ll like this: Q&A With Brooklynn Lily From Cheer Extreme Allstars

Once I got into high school I convinced my little sister to cheer because she became as interested as I did cause I showed her everything I saw but I just lived vicariously through her and asked her how every practice was, and that’s when I started going to comps regularly.

That year (2017) was also the year they made ArcticCats, which was a senior 1 team and I was like “omg this is perfect”. I had always thought it was something I could never do, but I knew I would regret it if I didn’t try out so I did and it was the best decision I’ve made!

Which teams have you been on throughout your cheerleading years?

What was your reaction when you made Sabres?

I was honestly speechless. Sabres was a team that I followed and loved as a fan for years and I never thought I would be on it!

How does it feel to be a part of such an established and well-known gym?

Unreal. Even now when I think about it I still can’t believe I was a part of it.

Cheer Athletics was like THE gym for me. When I was little I couldn’t believe I even lived close to it and had friends that went to it. I was fully obsessed with CA and looked up to so many of the athletes and teams so it’s definitely crazy to think about. I’m super grateful for CA.

How did you handle competition nerves and stress before competing?

I really focus on my breathing, pray, and just trust in myself and my teammates. This last year I was more excited than nervous any time we were about to compete so that just made it more enjoyable and easier!

Out of the routines you have been in, which one is your favorite?

Ah that’s such a hard question! I would have to say Arctic 2019 because it was genuinely just so much fun, especially our Summit routine!

On the other hand, which are your favorite routines that you have watched?

Definitely seeing The California Allstars Smoed and Brandon Senior Black in person for the first time at NCA 2016 because I was obsessed with “Cheerleaders” and never saw any teams outside of the ones at Cheer Athletics.

And any team in the large divisions are also always so fun to watch!

Out of all the competitions you have been to, which ones have been your favorites?

NCA for spectating because almost all my favorite teams are there under one roof, but for competing I would say Gold Rush this year was my favorite – especially day 1 it was so much fun and I loved the backdrop!

When did you get started with your youtube channel and why?

NCA 2016! And I don’t really know why if I’m being honest. I guess because I just watched so much cheer online I wanted to record it myself to share it with people like me who just loved to watch.

I remember specifically asking for a camera for my birthday which was in February just to use it at NCA for the first time.

What does a typical day look like when you’re filming at a competition?

Well, I usually don’t get much sleep because I’m always too excited/nervous. I get there early in time to see the first team on my schedule, then I compete and go straight back to watch all the rest of the teams – so pretty much just sit in the arena all day.

Then I get home at night and start the long process of transferring and uploading footage just to do it all again for Day 2!

What are some of your favorite moments from your years in cheerleading?

2018 – Honestly just practices because it was my first year of cheer, so everything was brand new to me and I loved being in the gym learning stuff and watching other teams.

2019 – Hitting zero at our last bid competition and getting my first Summit bid. It was so crazy because we weren’t expecting it at all, and we ended up getting paid! I’ll never forget that feeling. I still love and miss that team so much.

2020 – Hitting both days at NCA. That year’s team was so special – we just knew what needed to be done and did just that. Everyone fully trusted each other and it worked!

2021- Filming for Virtual NCA. It was honestly such a struggle. We had just come back from a week off due to the giant winter storm, but every single team was supporting each other and we all had the same goal, so finally getting the right video for submission felt so good!

What cheerleading-related things are you most proud of accomplishing?

Hitting at Summit finals both times I’ve competed, and winning NCA twice which is still so hard to believe. And just cheering in general and being on a team at CA. A dream come true.

How was it like competing at Summit finals, hitting the best zero of the season, and watching it with your teammates and coaches in the viewing area backstage?

So surreal. I literally balled right after competing. There was just so much emotion after the whole year we had, and it being my first/last time at the Summit with Sabres.

I can’t describe the feeling but that’s also something I’ll always cherish.

Will you continue being involved in cheerleading?

Of course! I still love cheer so much so I’ll probably always keep up with it, but sadly just as a spectator.

We hope you liked this interview with Andy, learning about his experiences and cheerleading years! Feel free to send us suggestions for who to interview next – just comment below or email contact@thecheerbuzz.com and we’ll have a look at it. 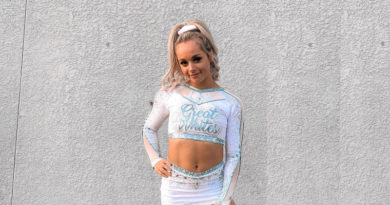 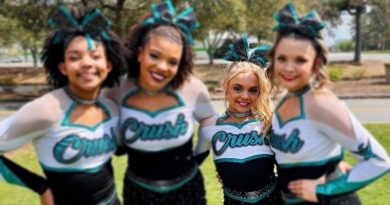