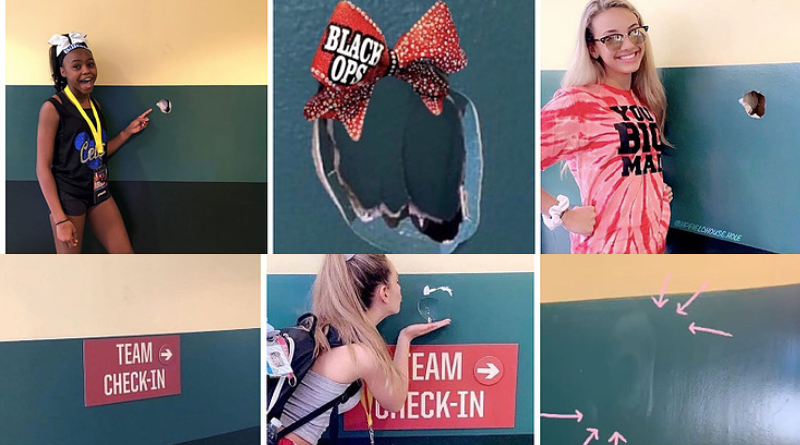 Who would’ve thought that the most talked-about moment after Worlds 2019 would be a hole in a wall?!

Since this has gotten so popular we thought why not write about it?

Why was there a hole?

Let’s start from the beginning. Where did this famous hole come from?

It all started after the Senior Medium Coed division awards where Woodlands Elite – Black Ops placed 2nd and took home the silver. A male athlete on the team was apparently so mad about not winning, that he punched a hole in the wall of HP Field House arena!

It all got pretty hilarious, as the now very famous hole even had its own Twitter and Instagram accounts.

For more memorable cheerleading moments: 10 Of The Most Memorable Cheerleading Worlds Moments

After Worlds was over, it was time for The Summit. By that time, the hole had gone viral and everyone wanted to see it.

Because so many people wanted to take photos with it, they literally put a security guard at the wall…

Many say that the situation is not only funny if you actually think about it.

Getting 2nd place at worlds is more than great. There are so many people that would do anything to even go to Worlds, let alone even place top 3.

You can absolutely be disappointed if you didn’t win, but you might want to keep that to yourself because it can show bad sportsmanship.

After The Summit was over they tried to hide it by putting a sign over it, but that didn’t work. People knew where it was and simply moved the sign.

Someone even started a petition, asking not to fix the hole. The description said:

“The legend of the hole, shall not be replaced, fixed, or tampered with. It is legendary and has become a part of our culture. Help petition for ESPN to never fix it, for there is no need to!”

More than 2 000 people signed but the hole was of course fixed, which means it’s officially gone.

After all, the hole will live on as one of the weirdest, funniest and most viral things ever to happen at Worlds.

Rest in peace, hole in the wall.

Why Doesn’t This Team’s Uniforms Look The Same?