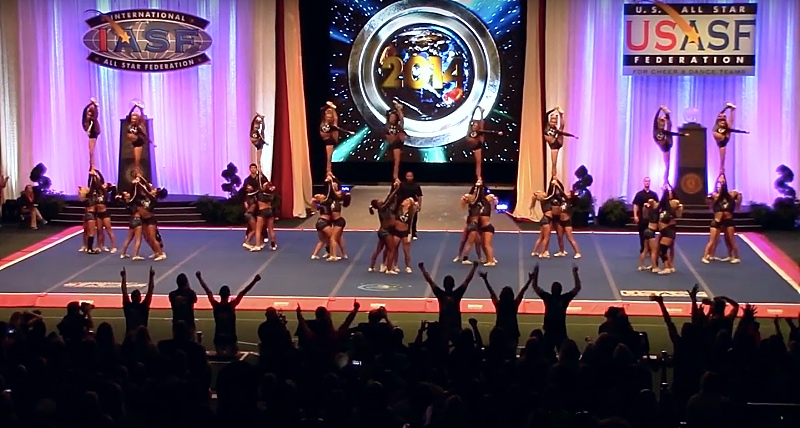 There’s always a lot of new things going on in the cheer world, but sometimes it’s fun to take a look back and see what has happened in the past.

This list will make you think “ahh, I forgot about that!” and awake some memories, or show some great moments in cheer history that you might not have seen before.

Sounds great, right? Let’s get into it!

Imagine this: it’s your time to tumble in the routine. You start your pass with a normal round off back handspring, but you end with a one and half full and land in a split?

That is exactly what Santwon McCray did on Top Gun Large Coed in 2008.

As if that wasn’t enough, he did the split again 10 years later (at Worlds 2018), this time on The California Allstars Reckless.

Watch from the beginning and you won’t miss it!

2. The most iconic stunt of all time

If you’ve never seen this stunt before, you’ve missed one of the greatest moments in cheerleading history!

In 2010, point flyer Maddie Gardner and her stunt group on Cheer Extreme Senior Elite did something no one had ever done before: a 360 ball up tick-tock that became the most memorable and iconic stunt the cheerleading world has seen so far.

The stunt is at 2.00 if you don’t want to watch the whole routine.

Opening a routine with 15 out of 20 girls throwing a double, followed by 17 out of 20 standing fulls… Excuse me?!

It’s no wonder why many call ICE Lady Lightning’s 2013 opening the best and most iconic one in cheer history.

With a voice-over saying “In this corner, needing no introduction” this truly is an opening to remember.

Fun fact: the year after, their ending of the routine was the same as the opening in 2013 with the voice-over “In this corner… Remember that? We’ll end it with a ’13 throwback!”

“Everybody line up! The show is about to start!”

World Cup Shooting Stars “Fashionista” dance from 2008 is a favorite among many in the cheer world.

Cheer Extreme Coed Elite had a pretty unbelievable experience at Worlds back in 2015.

In the middle of their day 1 performance, they had to stop the routine and clear the floor because of a tumbling accident.

As the team was warming up again with an alternate for the injured girl, their point jumper injured his knee which meant they had to throw in a second alternate in the routine.

The two fill-ins had only 30 minutes to learn the whole routine (!) before going out on the competition stage, and guess what?

THEY HIT. Both days. And won Worlds. Wow.

Fast forward to 2.30 for their day 1 routine, or watch the whole video for the full story.

In 2013, The California Allstars Smoed became the first team ever to go back to back (win 2 years in a row) in the Small Coed division at Worlds.

Despite some stunt bobbles, Smoed scored the highest out of all teams and took back their title as world champions.

The team continued making history as they won again in 2014, making it a three-peat. What about 2015? Yes – they won again, which made their streak 4 years long!

7. The girl basing with one arm

Basing high to high tick-tocks and double-ups is already hard, so imagine doing it with one arm…

That is what Destiny Johnson Cheer Athletics Panthers did at Worlds 2014. The team ended up in 3rd place after Orange (1st) and Shooting Stars (2nd).

The main stunt is at 1.30 and she is basing in the center group.

The crowd was crazy loud during the whole performance of World Cup Shooting Stars at Worlds in 2013.

One moment that made the crowd scream even louder was after Kelsey Rule finished her amazing tumbling pass.

Brandon Allstars Senior Black struggled at Worlds for years. They always performed amazing routines but couldn’t seem to hit zero both days – until 2016.

It felt like everyone was cheering for them and wanted to see them win (just look at the crowd).

They hit both days and finally won Worlds!

Skip to 2.55 if you don’t want to see the whole routine (which you should, but anyway…)

The ending of Cheer Athletics Wildcats routine in 2009 is not the typical one.

The last part of the routines was a basket section with a very special ending. When catching the flyers, all stunt groups quickly “fell” on to the floor as the ending pose.

Watch the spotters’ hilarious reactions, as they had no idea what was going on…

Do you have a favorite moment out of these 10 or one we should include in a future list?