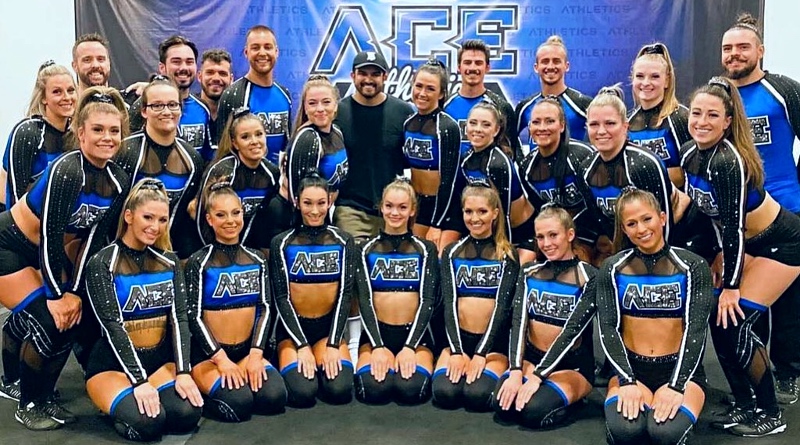 The “introducing:” series is where we showcase underrated teams & gyms that do something unique, have crazy skills, or anything else that we think needs more attention! Want to read some of our other interviews? Click here to see all we have published so far!

Riot was one of the teams who stole the show at the Virtual 2021 IASF Worlds. After delivering two incredible routines, they were announced World Champions in the International Open Coed Non-Tumbling level 6 division.

Here’s the story about their participation in the competition – after a 9-month long break!

You’ll also learn more about the gym and cheerleading in Canada, where they are located.

Riot is a Worlds team from ACE Athletics, located in Quebec City, Canada. The 2021-2022 season will be the gym’s sixth season and they have already made their mark in the cheerleading world.

With two different locations (Quebec and Montreal) and a total of 18 competitive teams, ACE is the biggest cheerleading program in Quebec.

The gym has no less than 6 Worlds teams, like Vicious who placed third at Worlds 2019 in International Open Non-Tumbling 6!

“Cheerleading is becoming more and more competitive in Canada over the years. We have some really great programs here in Canada and the levels keep expanding every year.

The competition is harder every season and the reputation of our sport follows the expansion. Canada has been increasingly making a name for itself in the world for a few years.

Normally, gyms have tryouts around June and we usually start our season in July and end it after Worlds, in May.”

“The last two years were, obviously, very different. We got our season cancelled in March 2020, like most of the countries.

We were able to train a little during summer 2020 and we were hoping to have a season like the USA did, but it got canceled again in October.

We had a 9 months long break, no training was allowed at all, and we are finally back in the gym since July.

We’re crossing our fingers things continue to go the way they go now and we could actually finish this season.

We’re about to have our first in person event soon and we’re really grateful to be back on a mat!”

Get the latest cheerleading news every week

Check your inbox for a confirmation email!

“We started training mid-July and we filmed for Worlds mid-September, so we got about 16 practices to put our routine together, after a 9 months break.

It was a big challenge at first, but the more we trained together, the more we saw that the goal was attainable. Our coaches had a very specific practice plan we had to follow to make sure we would get there in time.

Riot has 24 very motivated and hard working athletes, so as soon as we knew we had to achieve that goal mid-September, we started working to make sure we would achieve the deadline.”

“We filmed semi-finals on a Monday night, which is kind of unusual for a competition.

We were lucky we could get a small crowd to cheer for us since there were other teams practicing in the gym at the same time.

We worked a lot on our mentality and sportsmanship because we knew we had to be very strong mentally to achieve what we were hoping for. We filmed for finals two days after, on wednesday night.

This night was more nerve wracking.

We knew we had to do good and it was our last chance to prove what we were made of.

The first run was harder, but we decided to have a team talk before the second one to make sure everyone was ready to give everything we had been dreaming of for two years, and we ended up with a beautiful hit for that last run.

The Finals were broadcasted on a Saturday. Our coaches organized an event at the gym. We were all dressed up and we watched the competition on a projector all together.

We were all in circle for the awards, it was a very nerve wracking but exciting moment.

We knew we did good and we were really proud of what we put on the floor. We were against great teams – we knew it would be tight.

When we finally got announced in first place, people were screaming, crying and hugging. It was a really strong moment for everyone.”

“Over the fact we won, we were just relieved and so grateful we got to live this moment since it was taken away from us in 2020.

We knew our efforts and our resilience paid off. We’re all very close to each other so it meant a lot for everyone to live this moment together.”

Goals for the new season

“We want to step up the game. Coed non-tumbling is a very big division, we have to put something new and strong on the floor.

We’re working on our technique to be as clean as we can. Since we did IASF worlds, we have to put together a routine faster than usual right now.

It’s a challenge, but we’ll get there.

But, over the hard work, we’re just enjoying being back to training and in person events. We’re taking the time to appreciate each moment.

Our only focus right now is to beat one team: the one we were last season.“