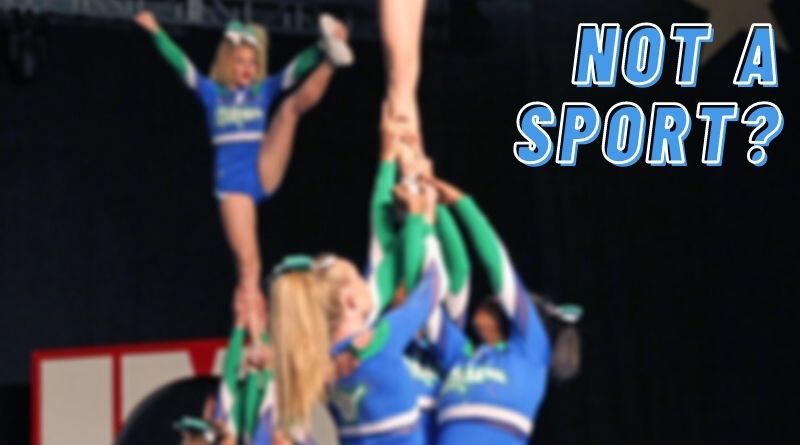 Imagine dedicating years to a sport that gave you strength, confidence, discipline, and structure.

Imagine a sport that gave you confidence in yourself and became an outlet for you.

Imagine a sport that created lifelong friendships, skills, and determination to succeed.

Something that you have worked so hard at and spent countless hours trying to achieve your own idea of perfection is considered….nothing.

“CHEERLEADING IS NOT A SPORT”

Cheerleading was first created as a sideline activity that showed school spirit.

A young man named Johnny Campbell was so excited for his school’s football team, that he jumped in front of the crowd and began to cheer. This later formed into organized “yell teams” that were made up of male athletes who would encourage school spirit at football games from their peers. It was a huge hit and on November 2nd, 1898, cheerleading was born.

The very first “yell team” members have opened the gates of cheerleader heaven for us and created the foundations of our most basic skills that have allowed us to build a strong technique of tumbling, stunting, and jumping. Today, our sport houses some of the most talented male and female athletes in the country.

I can’t tell you how many times I’ve wanted to scream from the top of my lungs that cheerleading IS a sport.

It’s a sport I love, a sport that changed my life, and a sport that gave me confidence that has followed me into my adult life. I feel too often that our sport is overlooked simply for the fact that we are entertaining and perform in front of crowds.

However, these performances take grueling practice hours, blood, sweat, broken bones, sprained ankles, sacrifices, and tears. The happy tears could be from working hard, making your dream team, or achieving a goal. The sad tears could be the unwanted mishaps, injuries, or competition losses.

It’s also not easy to be judged by a panel of strangers who don’t know how hard we work. Judges who watch every step of our routine that we have poured our hearts into. We work all week to perfect all aspects of our performance to have one shot to hit a two-minute and twenty-second routine. A routine that is filled with an acrobatic and artistic execution of our skills. Skills that have a tendency to destroy ACLs and mangle ankles, but have been perfected to be performed in front of a sea of unfamiliar faces who have their eyes and opinions on you.

So why is it that people do not consider us legitimate athletes?

Is it because of our uniforms?

Is it because we are a female-dominated sport?

Is it because it’s something you have never tried and it scares you?

Is it because we have perfected our most basic skills over the years and it seems too easy?

What is it? What is it about our sport that has progressed such a large amount of dislike over the title of it being an official sport?

Is it hard to pick up pom-poms and recite a cheer that we have memorized like the back of our hands? NO. But sharing the weight of a 130lb flyer with three other people, is. Trying new stunts and being hit, slapped, and kicked only to leave practice bruised and bloody, is. Tearing your ACL, black eyes, pulled muscles, and broken noses, is.

Practicing multiple times a week late into the night and sacrificing your weekends with grueling conditioning – only to compete one time, at one event, with one chance to show how your hard work has paid off.

We may never know what the real reason is behind people saying that cheerleading is not a sport. I, and many others know that it is. I truly believe that one day, cheerleading will be recognized as an Olympic sport and will forever change the world of cheerleading

A negative opinion does not take away the fact that you’re a hard worker, you are dedicated, you are passionate and you ARE an athlete.

This article was written by one of our content contributors. Do you want to become one? Read more & apply here.

Everything You Need to Know About Non-Tumbling Cheerleading Teams

What Is The D2 Summit? Here’s All the Information You Need

Everything You Need to Know About University Cheer (Australia)

I think once Cheerleading is allowed to be on its own and not considered as being attached to a sport, and have it’s own competitions it will be considered a sport. It should have happened a long time ago, at least 25 years ago when Cheerleading became what it is today. I remember watching movies like You Can’t Buy Me Love and tv shows like Saved By The Bell in the late 80s, to seeing Compeitive Cheerleading in the early 90s, then Bring it on came out, and I think that’s when most people took notice and realized this isn’t the same Cheerleading they remembered from their youth, these aren’t cute girls in short skirts, these are serious athletes. I’m rambling, but yes I think Cheerleading though not a sport at the moment due to the definition of a sport as having to be a competition needs to become one

Cheerleading is competitive if it is all-star, so, therefore, fits the definition of a sport.