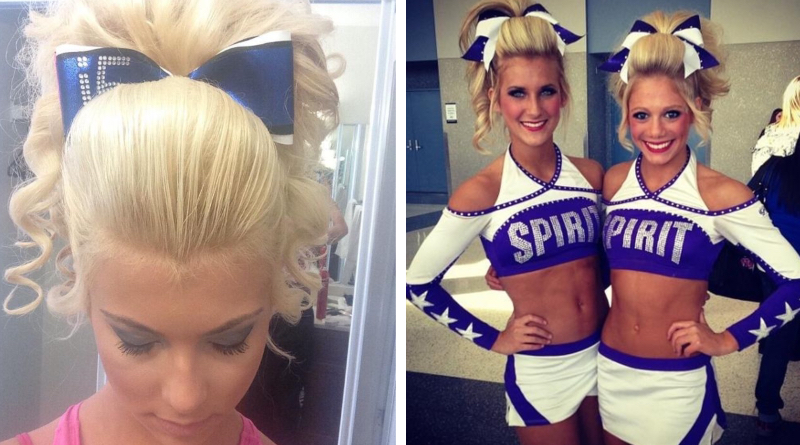 Get ready for a huge cheerleading throwback!

Our amazing followers sent in their answers to “Fill in the blank: Today’s cheerleaders will never know…” and it resulted in this list of the most popular responses.

This post contains the word “iconic” a lot. Sorry, but these were truly iconic times.

1. Trying to get the perfect poof

“How to make the perfect poof”, “The pain of poofs…” Many people commented about the poofs, which was no surprise.

Thinking back to when I spent such a long time in the bathroom before my first competition, trying to make the poof look decent… it didn’t.

2. How bad the makeup was

Probably the most talked about subject in the comments – the old makeup looks. They were, well… different from today.

“How painful glitter on your eyes was”

“The star stickers you put next to your eye”

Sidenote: no one makes a team by themselves, everyone on the team is equally important & everyone should be appreciated for their hard work, not just a few people. However, some become more well known/famous & remembered than others.

3. The cheetah icons & the hardcore abs

Throwback to when everyone wanted the iconic Cheer Athletics Cheetahs abs!

There were posts on Tumblr & Instagram of workouts to do, what to eat… those were truly the days people.

If you don’t know who the “Fab 5” girls are, you have some Senior Elite homework to do!

In between the era of Maddie Gardner (around 2010) and Ryan Cummings & Kenley Pope (today), everyone was obsessed with these icons.

Below is a clip from the Nfinity Champions League movie where they talk more about the girls and their stories.

The queen of baskets who was the first one ever to do a “kick full kick full” basket!

She was 8 years old when she got her double full, was on CA Panthers & Wildcats, did the kick full kick double, was featured on ABC News, did an interview with Teen Vouge… the list of things to remember her for is long!

These 2 best friends were already on Smoed back when the “Cheerleaders” show started.

People thought that they were actual twins, but in fact, they were 2 years apart and not even related.

It was heartbreaking to see Jenee (left) leaving the team and later seeing Madi (right) age out since they were both such a huge part of the team and that era of cheer.

Jenee cheered again for a while on Cheer Extreme Senior Elite and won Worlds 2019 with The California Allstars Reckless. Madi cheered for her school team after doing all-star cheer.

2013 was THAT year. Almost every single team you can think of had an iconic routine and things were just so different!

When everyone had real songs in their mix! What do you prefer?

Did you know teams can actually still use original songs in their music? Read about it here: Why Can Gymnasts Use Music in Routines but Cheerleaders Can’t? Here’s a Solution!

9. “When cheerleading was about the teams and not the people on the teams”

“Cheerlebrities” have been around for a long time but still. Tea.

The team name of Top Gun OO5 (now just “Double O” because of the level changes) has a greater meaning than many realize. It stands for “Omar’s Open 5”, so it’s two O’s and not two zeros.

They named the team after Omar Moreno who was a Top Gun Athlete who sadly passed away in a car accident.

Before Nike Pro’s, everyone was obsessed with these shorts! Who else had these?

Even greater than the shorts was the text on the butt…

12. Switching out the shoe colors in the logo

Forget the light cheer shoes, the bubble laces, the extra ankle support… when you needed new shoes you wanted ones with changeable colors.

“The uniform material”, “That uniforms had no sparkle.”

Uniforms looked nothing at all like they do today. It seems like there is a “conflict” today between those who think uniforms are getting too sparkly, extra & unathletic, and those who love it.

Where are you on that scale? What are your opinions?

What are your overall thoughts about cheerleading then vs now? Are we moving in the right direction or was it better before?

What Is The D2 Summit? Here’s All the Information You Need

Must-Watch: The Incredible 540 Ball Up To Lib

6 Things I Learned From My First Time At The Summit