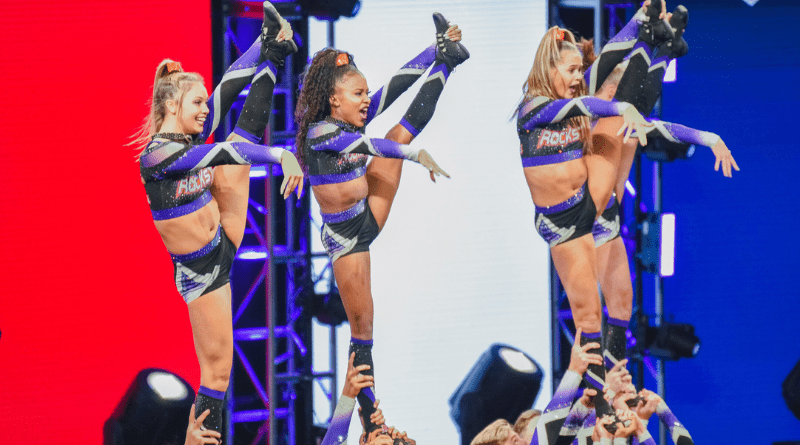 The IASF has announced some major changes that will begin to apply from the 2022-2023 season and forward.

These include 3 changes to the age grids and 5 new Worlds divisions. We’ll explain all the changes and how they might affect gyms and teams all over the world.

The official reasons behind the age grid changes are “for the overall mental, physical and emotional well-being of the athletes”.  They come at a time where athlete safety is heavily discussed – more about that further down in this post.

Remember! The changes are made by the IASF, not the USASF. Learn more about the differences between the organizations here: The USASF, IASF & ICU – What Are They and What’s the Difference?

In May 2020, the IASF announced changes to the age grid that were made because of the pandemic.

Athletes on U16 teams currently have to be 10 years or older.

The new age grid will increase the minimum age from 10 to 12 instead.

3. The Open & Global divisions minimum age is raised to 16

Just like the change above, the minimum age for Open and Global divisions will be increased as well.

Right now, the minimum age for Open teams is 14. This will increase to 16 years of age instead.

What do these changes mean?

Let’s dive deeper into what the changes will mean for teams and gyms around the world.

Will they affect USASF teams?

First of all, since the changes come from the IASF, they only affect international teams so far.

In October, the USASF announced some of their own proposed changes, including looking over the age grids and potentially making them more similar to the IASF.

Read about the potential USASF changes here: Here Are the New Rules Proposed to the USASF for the 2022-2023 Season (Big Changes!)

The USASF have commented on the IASF changes and will discuss them:

Lately, the discussions about athlete safety have become more and more common – both in the cheer industry and mainstream media.

Many often discuss the age grids and whether the age differences are too big or not. The changes will result in athletes on the same teams being more like-aged.

Since Open and Global divisions have no maximum athlete age, an increased minimum age could be a step in the right direction from that perspective.

Many argue that the changes could have a negative impact on international and small gyms.

These gyms often don’t have a large amount of athletes at this skill level. Increasing the age could make it harder to fill the teams with athletes, at least for the next few years.

Speaking of the IASF, do you know about the new uniform rule? Or do you have no idea what we’re talking about? Learn all about the new rule here: What Is the New IASF Full Top Uniform Rule?

Being able to compete this season & not the next

The final major issue we’ve seen being discussed is that the age increase is too big of a jump.

Since the minimum ages have increased by 2 years, athletes may compete on a team this year – and not be eligible for the same team next year.

A solution could be to make an exception and allow athletes who are already on these teams to stay, even when the new rules start to apply.

The organization has also announced not one, not two – but five new Worlds divisions!

These new divisions will be introduced at the 2023 IASF Cheerleading Worlds:

More details, such as the number of athletes:

Want to take a look at the entire list of IASF Worlds 2023 divisions? Click here to view the document!

Do you want to get cheerleading news like this directly to your email inbox? Join our free newsletter!