“CHEER” Season 2 – 7 Things to Know About the TVCC Team 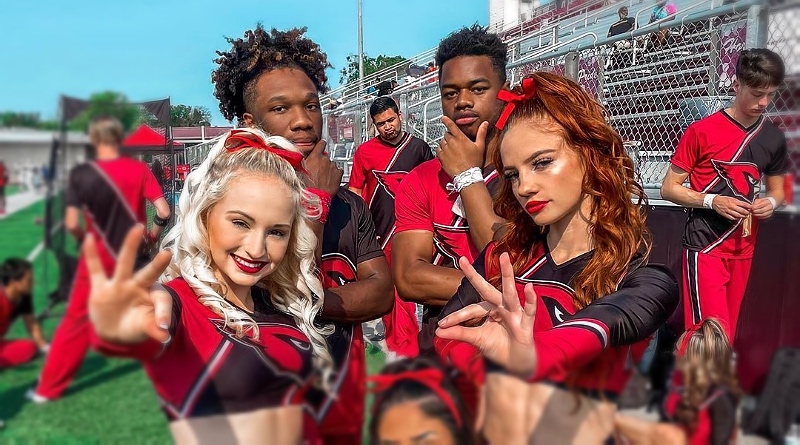 Netflix’s hit series “CHEER” is back for a second season! In this season, we will follow both the Navarro cheer team and their rivals from Trinity Valley.

Here are 7 things to know about the TVCC team!

Trinity Valley Community College, home of the TVCC cheer program, is located in Athens, Texas. The town is located south of Dallas, slightly more than a 1-hour drive from the city.

It’s fairly close to Corsicana, home of the Navarro cheer team, with just a 45-minute drive between the two towns.

Featured on the cheerleading teams’ uniforms is the school mascot. It is the cardinal, which is a type of bird.

The school teams are also referred to as the “Cards” for short.

Find out if you belong on the TVCC or Navarro team: Quiz: Do You Belong on the Navarro or TVCC Cheer Team?

Like many other cheerleading teams, the TVCC team has a secret saying – “CCFC”.

The meaning of this saying is not publicly known and seems to have been part of the team since it first started.

“CCFC isn’t something apart from that mat, it is on that mat, it is everywhere, and you must remember that the reason you raise your hands in the air, is embracing everyone else who has been on that stage before you, working their assess off for that win.” – source.

Learn more about other known cheerleading sayings here: The Meaning Of g3fca2a, FIOFMU, oafaaf And 9 Other Cheerleading Sayings

Not only did the team win NCA College Nationals in 2016 – they also took home the title of grand champions.

That means they received the highest score (98.5) out of all teams, in all divisions!

Vontae Johnson, head coach of the team since 2017-2018, has earned an impressive amount of titles himself.

In addition to being a former TVCC cheerleader, he also competed on prestigious teams, such as Team USA Coed and Cheer Athletics Claw6.

He has also won IASF Cheerleading Worlds in 2018 with Cheer Athletics Claw6.

Don’t know what ICU or IASF Worlds is? You will after reading our guides:

The team was one of the six recipients of the “Cheerleader’s Choice School Spirit Spotlight Award” in 2021.

Cheerleading fans had the chance to nominate deserving teams, out of which 20 finalists were selected. Finally, TVCC was voted one of the six final teams who received the award.

According to Varsity, the award is given to cheer programs that “elevate the sport, champion their communities, and drive competitive excellence.”

The team has taken home no less than 12 titles at the NCA College Nationals in Daytona, Florida!

At the 2021 championship, featured in the second season of “CHEER”, they beat Navarro in Finals with a score of 98.2 compared to Navarro’s 98.0.

The TVCC cheerleading team has won the most titles out of all the school’s athletic programs!

Hopefully, you learned something new about the TVCC cheer team! Will you watch season 2? Comment below this post!

Don’t forget to subscribe to our weekly newsletter for the latest cheerleading news.

Do You Know Who Helen The Pineapple Is?

What Is The New Large Senior Curse?