13 Of The Best Cheerleading Shows & Movies To Binge-Watch 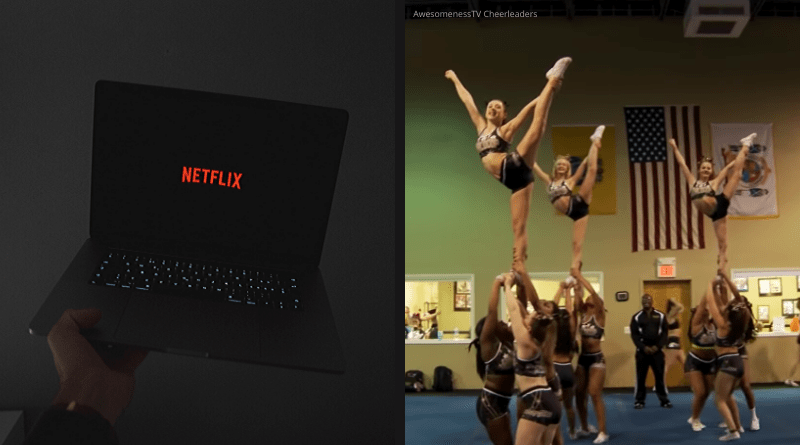 Now that lots of schools, practices and competitions are closed, we have a lot of time to binge-watch cheerleading shows, documentaries and movies!

This is a list of some of the most popular ones, plus some that you’ve probably not heard of before or might’ve forgotten existed.

Do you have any other suggestions? Comment below and we’ll add them!

If you have been in the cheerleading world for a few years, you probably remember the first Champions League competition and movie.

If you don’t know, the Champions League was first a competition pretty similar to The Majors (only certain teams got invited) and they put all the routines together and made a movie! The craziest thing is that it even aired in some cinemas around the US for one night!

It’s so fun to look back at previous routines and teams. Athletes, stunts and skills you might have forgotten, or didn’t even know existed! The music isn’t that great though since copyrighted music couldn’t be used and teams got special mixes just for that competition.

You can both rent the movie and buy it on iTunes. You can then watch it offline on different devices (we recommend a laptop or phone) or connect it to your tv and watch it on the big screen!

Here’s the link to the first champions league movie – made during the 2013-2014 season.

The second movie came out the season after. Here’s the link for champions league 2!

Like with iTunes, you can both rent it and buy it on amazon.com. There is also an option to watch it for free if you have Amazon Prime. (Prime is a subscription where you get faster shipping on items, discounts and access to lots of movies and shows for example).

Tip: there’s a 30 day free trial on the subscription, meaning you can sign up for it, watch the movie for free and then cancel anytime! Sounds like a good deal, right?

Here’s the link for the first movie on Amazon Prime.

Here’s the link for the second one.

And lastly, here’s the link for the 30 day free amazon prime trial!

A series that followed CheerSport Sharks – Great Whites a few seasons ago on their road from tryouts to Worlds. You get a look inside practices, athletes’ personal life, competitions and all of those exciting things!

Netflix is one option where you can watch the whole show, but it seems to only be available to watch in some regions/countries…

Some of the episodes are uploaded on Youtube, but not all of them. If you can’t access the show on Netflix in your country, these episodes are still great to watch.

Click here for the channel (the episodes are not in order – make sure you’re watching the right ones so you don’t get confused)!

A documentary that follows high school cheer teams on their journey to the National High School Cheerleading Championship (UCA) in Florida. Get insight into the world of school cheer and see if it’s like the bring it on movies or not? Inside looks at practices, competition nerves, rivalry, struggles and some great cheerleading – you get everything in just 1 hour and 30 minutes!

Here’s the link to the documentary! You can watch it on Amazon Prime (explanation above) with your subscription or free trial.

Do we need to say more? The whole world has been talking about “Cheer” so you probably know what it is…

Watch it again and cheer for the team, cry, laugh at the funny moments, cry some more, and wish you were coached by Monica.

6. On the inside: Cheerleaders

The oldest documentary on the list is definitely this one! It aired on the Discovery Channel in 1999 and followed World Cup Shooting Stars, Cheer Athletics Panthers, GymTyme Platinum and Cheer Athletics Wildcats.

Watch it for some great old-school allstar cheerleading, uniforms, hair, facials and the stories behind some of our favorite teams!

Raise your hand if you have watched this more than 5 times! It’s one of the most popular cheerleading Youtube series, but it seems like many have forgotten about it.

The documentary is focused on World Cup Allstars youth level 5 team, Twinkles on their journey to NCA. We get to follow the making of the routine, showcases, practices, challenges, private life and much more.

Many of the girls on the team later made the gym’s large senior team Shooting Stars and it’s so fun to see when they were younger!

You can watch it on Youtube! Here’s the link.

8. The Teen Superstars of Competitive Cheerleading

Follow Gabi Butler, Carly Manning and Michaeleddie Rivera in this 16 minutes mini-documentary. Watch as they practice, talk about the sport and compete at Worlds in 2014.

This is another mini series with 6 episodes from AwesomenessTV. Follow CheerForce Blackout and World Cup Shooting Stars on their road to the 2015 Champions League.

When the regular “Cheerleaders” show was on a break, AwesomenessTV released another mini series (also 6 episodes) following a level 4.2 team from Texas Cheer Allstars on their road to the Champions League.

Read more about it here: 3 reasons to watch the new “Cheerleaders” show on Youtube

The original cheerleading show! Now is the perfect time to start over and binge-watch all of the “Cheerleaders” seasons. You can have a cheer marathon and follow Smoed from 2013-2020. It doesn’t get any better than that!

On Youtube – just search for “cheerleaders” and the channel comes up.

The episodes are really high quality (like, really) and it’s so fun to see cheer teams from outside the US!

You can see all of the seasons here on the gyms’ Youtube channel.

Follow GymTyme Allstars’ iconic team called Blink. A super talented team, lots of creativity, some of your favorite athletes, lots of funny moments and amazing cheerleading. “Cheer full out” is so funny and well made – just watch it because you won’t regret it!

How many of these have you watched already? Which one is your favorite?

2 Stretches You Must Master to Get a Needle

3 Reasons To Watch The New “Cheerleaders” Show on YouTube

How to See if a Skill Is Legal or Not​